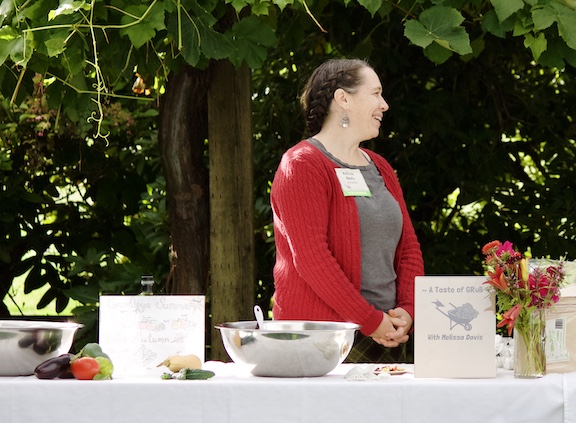 If you have attended many GRuB events, there’s a good chance you have tasted the delectable food lovingly and skillfully prepared by GRuB Super-Volunteer Melissa Davis. Melissa first volunteered with GRuB four years ago after moving to Olympia from Walla Walla, WA. As a chef and nutrition educator, Melissa had left strong connections in Walla Walla’s food communities, including with farmers, food producers, and eaters. Moving to the relatively big city of Olympia, she felt like she had lost many of those connections. Craving community, Melissa came to GRuB on the recommendation of her sister. GRuB felt like a small but powerful part of the Olympia community, and presented an easy way to develop a sense of place in Olympia. Because of her culinary background, Melissa signed up to volunteer as a Guest Chef, something that soon became a consistent part of her life.

Melissa’s professional life also overlaps seamlessly with GRuB and our youth programming. She works as a Nutritional Educator with SNAP-Ed, an educational program similar to GRuB’s GroundED program, that serves Thurston County participants who are Supplemental Nutrition Assistance Program (SNAP) eligible. SNAP-Ed teaches youth and adults nutrition basics and imparts skills and behaviors to eat healthfully. At GRuB, Melissa has developed and learned tools and best practices in working with youth and food justice work that have helped her facilitate her programming with SNAP-Ed.

In the four years since first walking through GRuB’s farmhouse doors, Melissa has become one of the most consistent volunteers at GRuB, a familiar and beloved fixture in the GRuB kitchen. She has prepared delicious and nutritious meals at many of our annual and special events, including Harvest Soiree, farm dinners, Victory Garden Project (VGP) orientations, to name a few. Melissa loves tackling the challenges of planning and preparing a meal using fresh produce from the GRuB farm and showcasing “how delicious simple food can be.” Melissa has also served as a GRuB School Guest Chef working with and guiding students to prepare weekly meals during our GroundED and Summer youth programs. Melissa loves working with the students, and is skilled at creating a relaxed environment in the kitchen where she and the youth can cook and learn together. She cherishes watching as the youth, many with limited experience working with food, develop autonomy in the kitchen, begin trying things they have never tried, and take pride and ownership in the food they’ve helped prepare for their fellow students. In addition to volunteering in the kitchen, Melissa has assisted with building backyard gardens as part of the VGP and in 2017, Melissa received a raised-bed garden of her own from GRuB!

In early 2020, GRuB decided to expand our Donor Leadership Circle to create the Sustaining Circle- a group that includes ALL of our dedicated supporters. The Sustaining Circle goes beyond our biggest financial supporters, and also acknowledges the huge support we receive from dedicated community members who consistently share their wealth of skills and talents with GRuB. As a member of GRuB’s Sustaining Circle, Melissa is committed to continuing her support for GRuB as a Guest Chef and beyond. As part of that commitment, Melissa prioritizes making time for GRuB and tries to be available as much as possible when opportunities arise for her to share her skills. She also hopes to support other volunteers in GRuB’s kitchen, to boost their confidence and provide guidance in preparing meals for the large community gatherings that happen here. Once we are allowed to gather again, Melissa will further be assisting with menu planning and food preparation for fundraising events that help raise money to sustain GRuB’s programming.

GRuB is privileged and beyond thankful for Melissa’s continued support and willingness to share her immense, invaluable skills and knowledge with the GRuB community. We are thrilled to have her as a new member of the Sustaining Circle, so she can continue to nourish us with her healthy, beautiful, and delicious food for years to come.

‍
Look for more stories in the coming weeks of other Sustaining Circle members!  If you, too, are called to join, please contact Kerensa Mabwa at kerensa@goodgrub.org or 360 753-5522.