Plant of the Month: Dandelion! 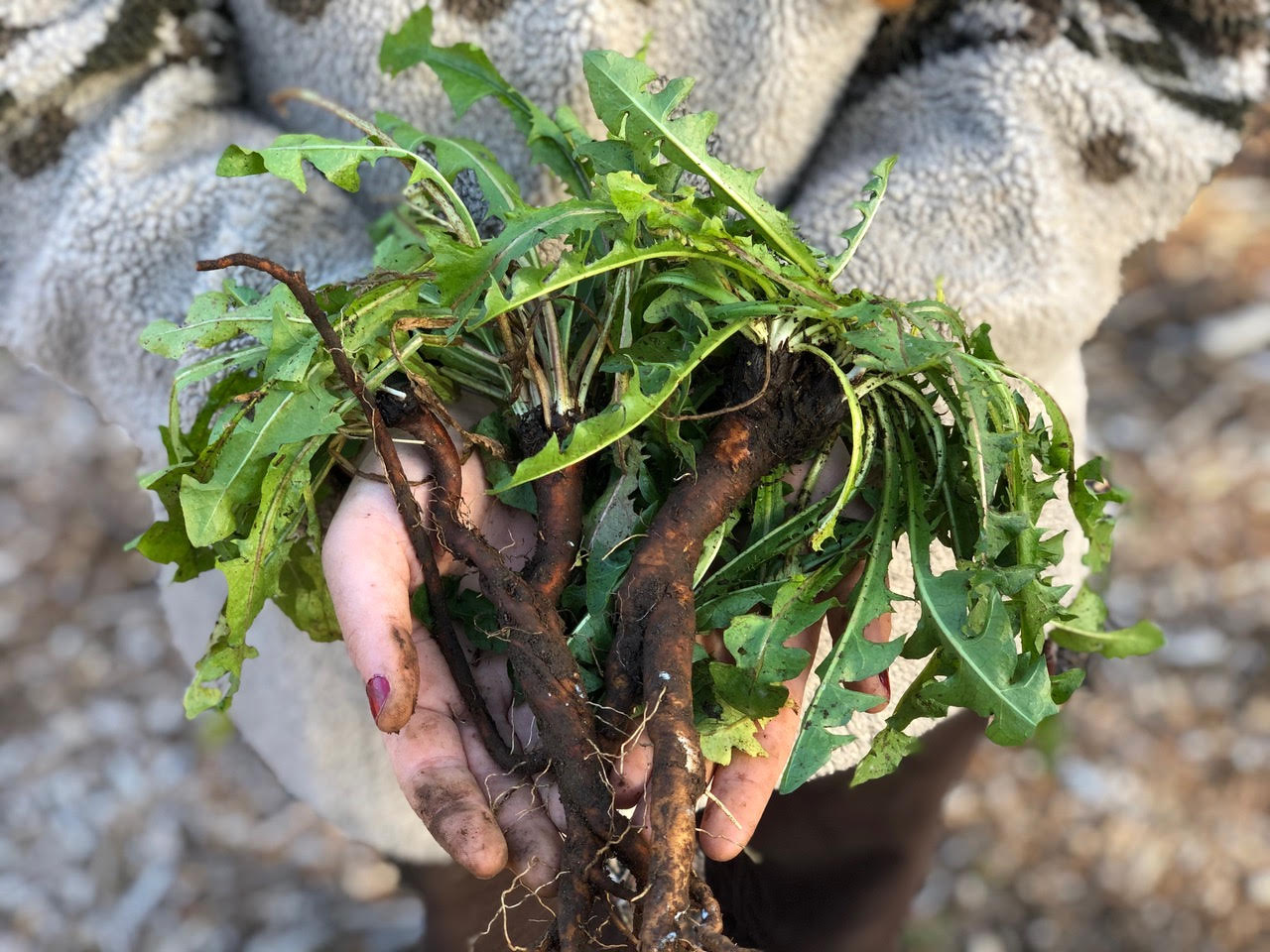 With signs of autumn presenting themselves, our second blooming season for dandelion is upon us! Commonly referred to as a weed, dandelion is frequently overlooked and underutilized. Thankfully, once folks truly get to know her and all that she is and offers, they begin to see her as the wonderful problem solver she is. Dandelion is resilient with her ability to grow in the most barren of places, helping to improve soil quality for other plant relatives to thrive. She often catches the eyes of our little ones when her seeds are present, letting their imaginations run wild with endless wishes.

Identifying Dandelion: What most people think of as a single dandelion flower is actually hundreds off lowers growing together on a single base. A “petal” is a complete flower. Dandelion flowering heads open in sunlight and close in dark rainy weather. Each dandelion can produce more than 5,000 seeds per year, which form “wish balls” that are carried away with the slightest breeze or breath. Individual seeds with parachute-like hairs have been known to travel on the wind as much as five miles! It reminds us that gifts are sometimes “weeds” found right under our feet. We too can rise up from difficulty and become medicine.

Dandelion only has one flowering head per stalk. Other look-alikes have many flowering heads per stalk. Many look-alike plants have similar leaves, but dandelion leaves are nearly hairless, unlike similar looking plants including hairy cat’s ear and nipplewort. They have toothed edges, hence the French name, “dent de lion” or lion’s tooth. Leaves and hollow flower stems grow directly from the rootstock. Dandelion roots, leaves, and stems all exude a milky white sap. Dandelion belongs to the Asteraceae (sunflower) family.

‍Where it Grows: Thegenus Taraxacum includes over 250species that grow throughout the world. It will thrive just about anywhere including pristine mountain meadows, barren open fields, and even cracks in cement.

How to Harvest: Every part of dandelion is useful. Avoid harvesting along roadsides, agricultural or industrial sites, places that have been sprayed, or areas frequented by dogs. To eat dandelion leaves, pinch off young tender ones from the center of plants. Rinse and keep cool before eating fresh or cooking. Older leaves become intensely bitter as they are exposed to increasing amounts of sunlight. To preserve leaves for tea, harvest on a dry day. Use a rubber band to bundle small bunches then hang to dry, or dry leaves in single layers in baskets or a dehydrator. Store in a glass jar for up to a year.

Dandelion buds can be eaten fresh, cooked, or pickled. Harvest when they are tight little balls that do not open when you pinch them. Gather dandelion flowers on sunny days when they are dry and fully open, usually from March to early May.

The medicinal properties of dandelion root vary a little from season to season. In spring, they are bitter and are medicinally optimal as a digestive stimulant. In fall, they are sweeter and higher in a carbohydrate called inulin, which is excellent for gut health and insulin balance. When digging dandelion, even the smallest piece of root left in the ground will grow into a new plant.

To dry dandelion roots, dig them up in spring through fall, wash thoroughly, pat them with a towel to remove excess water, and then dry them whole in a dehydrator or on a basket next to a wood stove. You can also hang-dry the roots by using a long piece of string, wrapping each root a couple times, letting out six inches of string, and wrapping another root, thus making a long dandelion root chain. Once dry, use clippers to cut the roots into small pieces, then store in a glass jar.

Food: Dandelion leaves can be a gourmet green if you know when to harvest and how to prepare them. While they taste a little bitter, they add flavor variety as well as concentrated nutrients to dishes. They can be steamed, sautéed, or boiled, and incorporated into dips, casseroles, and soups. Boiling older leaves in a pot of water for about five minutes removes some of the bitterness. They are high in vitamins and minerals including potassium, calcium, magnesium, iron, and vitamins A, B, and C. Dandelion buds can be eaten like capers when they are still tight little buttons. They look like little watermelons and taste best cooked or pickled. Remove sepals (they look like tiny leaves) to decrease bitterness.

Dandelion flowers have a sweet and mild flavor. The base of the flowering head and the green sepals are bitter. You can pull the flowers off and use them straight in salads or add them to cooked foods like quiche, pancakes, muffins, and fritters. They are high in vitamin A.

Medicine: Dandelion is one of the oldest documented medicinal herbs. A European variety was intentionally imported to the Americas on the Mayflower ship (around 1620) as a food crop and a panacea or “cure-all.” It spread and was quickly incorporated into American Indian medicine.

Dandelion leaves are used as a simple and safe diuretic, meaning that they help the kidneys to excrete excess water from the body. They can be eaten, dried and made into tea, powdered and placed in capsules, or infused in vinegar. Dandelion flower is a popular addition to facial cleansers and creams because of its high nutrient content. The flower oil is also used topically for inflammation, sore muscles, and arthritic joints. The milky, white sap from the plant inhibits the growth of warts. Try dabbing warts with sap daily for a couple of weeks.

Dandelion root generally helps our body to get rid of waste products. It supports our liver, an organ that is responsible for breaking down dietary toxins, drugs, hormones, and metabolic waste. It also promotes the elimination of excess uric acid, which can cause tissues to become more inflamed and reactive, potentially leading to allergies, hay fever, and gout. Arthritis, acne, psoriasis, hepatitis, and premenstrual syndrome may be improved by taking dandelion.

Dandelion root also acts as a gentle laxative through stimulating bile, which helps us to break down fat, and through promoting the rhythmic contraction of the intestines.

Dandelion root contains up to 25% inulin—a compound it produces to store energy. Inulin helps us to absorb minerals including calcium and magnesium, and is also a prebiotic—meaning that it feeds healthy gut flora. Inulin provides some of the energy of carbohydrates without the need for insulin, making it an ideal plant for diabetics. In addition, diabetics are typically deficient in minerals, and dandelion helps to replenish these.

To receive the optimal anti-inflammatory and liver supportive benefits of dandelion, use fresh roots by eating them or making glycerite or vinegar with them. The dry root tea is boiled as a decoction and is nutritive, good for digestion, and detoxifying.

Dandelion is masterful in problem-solving. Sit with or notice dandelions growing around you. Take a few deep breaths and think about the challenges that you face in your life. Consider how dandelion finds creative solutions to many of its challenges. Think through these steps in problem-solving:

·        What would you like to see happen with this challenge? Name your goal clearly.

·        What do you think is contributing to the challenge? What are the facts? Look for as many perspectives as possible.

·        Brainstorm solutions—be creative and think of as many as you can!